What makes a good mother

I am a good mother, damn it. No, I don’t always cook homemade meals. My 6-year-old wants to work at McDonalds when he grows up so he can see me. My kids know all the important curse words and can spell them. (but wouldn’t dare say one.)

Sometimes I raise my voice and may even scream. I have forgotten appointments and field trips. My 3-year-old daughter knows the words to songs by rap artists and rock stars. I occasionally allow my kids to take a sip or two of my coffee. I don’t own a glue gun and think hodge podge is an appetizer at TGI Fridays.

So, what makes me a good mother? I love my kids so much that I would do anything for them. That includes risking life and limb to get a toy. Case and point last night when I purchased a Little Tykes washer/dryer set from an online garage sale for $10. My first mistake was offering to buy something from a woman who, judging by her profile picture, could be Lindsay Lohan’s roommate. Let’s just say the trailer was filthy, but the brand new motorcycle parked out front was spotless. We got the washer/dryer home and my daughter jumped up and down with glee. Clearly, she was switched at birth because I loathe my laundry room. She wanted to play with it immediately and stomped her feet when she found out had to scrub it down first. I used
Pine-Sol until my hands were raw. When I flipped the toy over I noticed something swishing around inside. I popped off a few pegs to unveil a rancid smelling liquid. Dead bugs were floating on the surface. The people we purchased it from had the toy inside their house. I spent an hour scrubbing it with dish soap and bleach. Gwyneth Paltrow doesn’t know shit about goop. By the time I was done it looked and smelled like new. 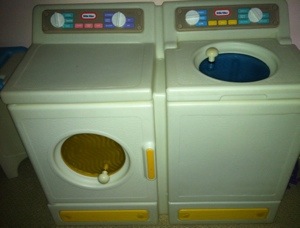 Now, I had to scrub my hands and hair with scalding hot water. I got in the shower, but the door wouldn’t shut. Eager to clean the filth off my body I tugged and pulled until the door rail snapped. There I was naked, covered in vomit from a trailer park and holding a shower door. At that moment I knew one thing: I just earned that #1 Mother coffee mug.