I learned a few things last night. First of all, I am too old to stay out past midnight. Second, even at my age, I still care what people think. I went out to dinner with a few friends. We had a few margaritas, binged on Mexican food and laughed until it hurt. We were celebrating our friend Kim’s new job and my birthday. It was really just an excuse to have a girl’s night out. After dinner our friend Matt suggested we move the party to a second location. There is a restaurant nearby that serves a delicious gummy bear martini. Kim and I gave each other the we have kids and need to get home look. People who are in their late 30’s who say they still feel 21 are complete liars. I wanted my Snuggie and couch. Nikki and Matt refused to take no for an answer. So, Kim and I agreed to go along and drink water.

For the most part, the place had cleared out. A few people were drinking at the bar. Waiters were cleaning up from the dinner rush. If you think for one second the wait staff is happy to have another customer at closing time, you are sorely mistaken. When I was a waitress we mumbled under our breath when a late party arrived. You have got to be kidding me. Sure, I worked at restaurants where Hollywood memorabilia adorned the walls. It doesn’t matter if you are serving food topped with canned cheese or plates drizzled with safton-scallop sea foam.
Everyone from the cook to the guy washing dishes is cursing you out.

There was one lone table of customers in the dining room sitting with the owner. They also happened to be friends of Matt. They had finished eating and were sipping cocktails. Everyone seemed very nice as we shook hands and exchanged pleasantries. Well, except for a guy in the corner who looked like a Jay Leno Shrinky Dink. Oscar the Grouch was seated at the head of the table. 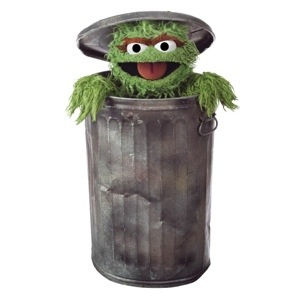 It was obvious that neither of these men were pleased that we joined their little party. In fact, they were glaring at us. I will admit Nikki and I are a little loud. I turned to Kim, folding my arms like Oscar, and said, “He is clearly not a fan. Seems a little grouchy don’t you think?” At that moment, Oscar shouted across the table at me. “Are you mocking me?” I have to admit he caught me off guard. It was as if I was being scolded by a teacher for passing notes. (Do you like Billy? Circle Yes or No ) I replied, “I was just saying it doesn’t seem like you like us.” Shrinky Dink Jay Leno chimed in, “We don’t.” There was no laugh track, just awkward silence. Nikki tried to defuse the situation, “Look, we are all good people.” Oscar interrupted, pointing towards me, “She is wretched!” Wretched? I couldn’t believe he didn’t like me. I have been called a lot of things in my life, but this was a first. He went on and on trying to humiliate me. “You sit there in your cardigan…” You can call me names, but attacking my sweater? Now, that is just going too far. Besides, Oscar wasn’t one to talk. He was wearing a striped sweater he stole from J.J. Evans. Dy-no-mite! I thought I looked good. He should see me during the school week. Several of Oscar’s friends apologized on their way out for his obnoxious behavior, but for the most part it turned into an episode of “Saved By the Bell.” The same kids who were talking and laughing with me moments earlier avoided eye contact. The leader had spoken and determined I was wretched. I doubt I will ever see Oscar again. That is a good thing. I don’t love trash.