I knew it was going to be a great day after the first conversation I had this morning. I got a call and the woman on the other end introduced herself, “Hello. My name is Whitney. Whitney with a W.” I nearly spit out my coffee. How else would you spell Whitney? Do people get her name wrong so often that she feels it necessary to clarify in her introduction? I can’t think of another letter with the “wa” sound. Did Common Core f**k with the alphabet, too? I suppose Q is close. Qhitney? Nah, even spell check knows that is wrong.

Qhitney sounds like a made up name. I don’t know if there is anything worse a parent can do to a child. I’ve heard some doozies. Izander is a good example. Izander is not a name. It is some kind of camping tool. They don’t make cups, magnets or miniature license plates that say Izander and that is only the beginning of his problems. Izander isn’t getting the ladies. Izander won’t land an interview, let alone get hired. Izander won’t be president.

My day only got better. After work I put on the mom skirt tankini and went on the slip n’ slide with my kids. Wipe away the drool fellas. My 14-year-old thought it was funny to take video from the window. We will see who is laughing after he gets out of solitary confinement. Here is a screen grab. Clearly, I need to work on my form. 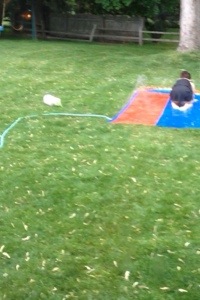 Who needs a pool? For $12.99 you can bruise your legs and pull a muscle in your back. I won’t allow my children to ride their bikes in the driveway without a helmet, but I will let them dive, head first, on to a thin piece of wet plastic on top of solid ground. I bet Whitney with a W wouldn’t be this reckless.