Anakin in the house

On any given day Spider-Man, Batman, or Ironman are running around my house. My 5-year-old loves to dress up and pretend to be his favorite super heroes. He is either going to grow up to be an actor or live in my basement, with grotesquely long finger nails collecting comic books. He has been begging me to buy him a new Star Wars costume, “I must be Anakin Skywalker.” Apparently, Anakin is Darth Vader and he is Luke’s father. It sounds to me like an episode of General Hospital. I have never watched a Star Wars movie. (Geeks everywhere gasp in horror!) I have seen clips and heard the theme song. Now, thanks to a Star Wars obsessed kindergartener, I am learning the characters.

You can imagine how excited my son was when we received an Anakin Skywalker costume in the mail courtesy of the company “Anytime Costumes.” 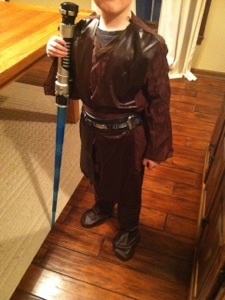 He jumped up and down, professing his love for me. A few days ago he hated me and wanted to go live with the Boxcar Children. Who says money (or gifts) can’t buy love?

Remember when we were little and costumes consisted of a cheap plastic mask and vinyl suit? One wrong move and that sucker would split up the back. This outfit is made of cloth. The belt is rubber. Praise God, it will last longer than a week. The costumes on this website are affordable, too.

My husband and son played together for hours. Of course, I had to be the bad guy when it came time for bed. I was not dressed as the wicked witch.
I don’t need a costume to play that role. 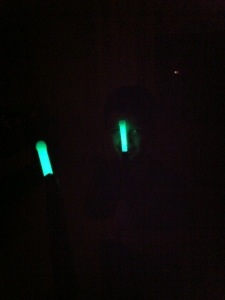