There are some pictures floating around the world wide web of Ryan Gosling. They are supposedly Before & After pictures of his nose. Am I supposed to care if he had plastic surgery? Honey, it doesn’t matter if the end result is perfection. I don’t see anything wrong with a little tweaking here and there. Ryan, call me.

I am addicted to reality TV. The Real Housewives of (fill in the blank) is my favorite. I also watch Kim Zolciak’s Don’t Be Tardy on Bravo. I am actually a big fan.  Her husband, Kroy Biermann, seems like the sweetest guy. He must be nice because they are expecting another baby. The paparazzi snapped a picture of her baby bump. She was hanging out on the beach smoking. Hi, 1970 called and invited you to a party. Y’all might as well hop in your panel wagon and drive on the highway while holding a baby in your lap. 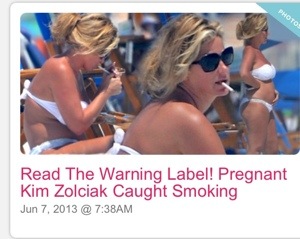 My good friend, Nikki (a.k.a. crazy cat lady), would vote for this candidate. Morris the cat is running for mayor in the Mexican City of Xalapa.

This kitty promises to rid the city of rats (a.k.a. corrupt politicians.) Morris won’t be allowed on the ballot, but people can write in his name. I don’t know why, but this story reminded me of the song Señor Don Gato. We sang it during music class in elementary school. In hindsight choosing a song about a cat who goes on a roof to read a love letter, falls off and dies, was not the best selection by the chorale director. I still know the words to this song that I learned in the 80’s. Yet, I can’t remember the place I put a receipt so I wouldn’t forget where it was.

I worked in the TV news industry for a decade. While part of me feels bad for the reporter in this video, the rest of me is laughing my a** off. In my career I was insulted and threatened. (and that was before I even left the newsroom.  Ba,da,dum.  I will be here all night people.  Tip your waitresses.)  The only difference is it wasn’t recorded.  Then again, there may be video out there of me screaming before a live shot because Godzilla sized bugs were flying around my head. If anyone has it I encourage you to post the clip to YouTube. It would be an instant classic.

2 Responses to Around the www