My 6-year-old son is braver than me. (Or is it braver than I? My English teachers are cringing.) This kid had a piece of his head cut off today and didn’t flinch. He underwent surgery to remove a mole with moderately atypical cells. I nearly lost my mind when I heard a pathologist mention the “c” word. No, he didn’t call me a C U Next Tuesday. Although it wouldn’t have been the first time.

I noticed the mole after my son got a horrible haircut. Our usual hairdresser was off, but my children were starting to look like Chewbacca’s relatives. So, I scheduled an appointment anyway. This chick gave my kindergartner a style shorter than a high and tight. While washing what little hair he had left I noticed an unusual spot on his scalp. I treated it with Neosporin for a week. Growing up, my Dad’s cure for everything was Neosporin. Papercut? Neosporin. Burn? Neosporin. Lose a limb? Neosporin. When it didn’t go away I scheduled an appointment with the dermatologist who recommended it be removed. I suppose I should thank Edward Scissorhands.

My 3-year-old daughter hugged my son before his appointment and said, “It will be okay.” My heart melted. It almost made me forget how, moments earlier, she told him he needed to move out because he annoyed her. True story. She is three going on 15. 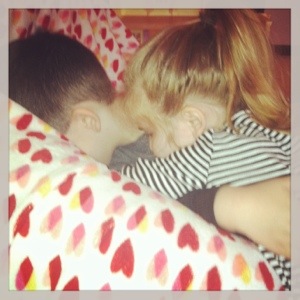 On the way to the ambulatory surgery center my son admitted being nervous, “I am so scared I am farting like crazy,” he said. Look out Honey Boo Boo, our white trash family is on your tail. I couldn’t help, but giggle. A plastic surgeon performed the surgery using local anesthesia. I was allowed in the room and held his hand until it was over. He would have been fine without me. This kid didn’t stop talking the entire time. He gave a long winded speech about Legos, superheroes and why transformers aren’t cool. Then, he discussed my excessive sweating at length. Yep, he told the surgeon and two nurses, “My Mom sweats A LOT especially when she exercises.” It was a complete non secuitur, but how can you lecture a kid getting 15 stitches on the top of his noggin. At least he didn’t tell the story about how I had to race home from his school to use the loo. He is probably saving that one for the dentist.