This story out of Ohio is unbelievable! Three young women, kidnapped a decade ago, are found alive. Amanda Berry, Gina DeJesus and Michelle Knight were held captive inside a house in Cleveland. Neighbors say they thought the house was vacant. Three brothers were arrested in connection with their kidnapping. How the hell did they get away with this crime for so long? As a mother I cannot begin to imagine living day to day knowing a stranger kidnapped your baby. Then, getting a call years later that they are alive. It gives me goose bumps.

The neighbor who helped the women escape is a hero. He is also hysterical and destined to be auto tuned. Charles Ramsey is the next Antoine Dobson:

“I barbecued with this dude! We eat RIBS and what not, and listen to salsa music!… There’s nothin’ exciting about him, until TODAY. Hehehe.”

“I heard screaming. I’m eating my McDonald’s. I come outside. I see this girl goin’ NUTS.”

McDonald’s should reward him with free French fries for a year. Let’s start a Facebook page encouraging Mickey D’s to make it happen.

On the other hand, the 911 operator doesn’t deserve squat. I want to slap him. I know people call 911 for ridiculous ailments. “My kid hurt his finger.” You do not need an ambulance. Get a damn band aid and stop wasting taxpayer dollars. Trust me, I have heard it all on newsroom scanners. However, it’s not everyday you get the I was kidnapped 10 years ago call. You may want to bump this one ahead of the rectal bleed. (They are more common than you think.) “Hide yo’ kids, hide yo’ wife?”

Update (I called this one) : 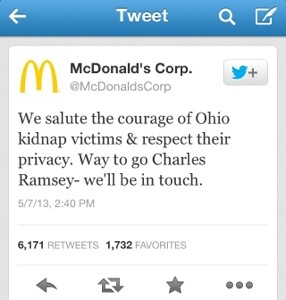