My dog, Max, has been growing his hair out for a few months. He didn’t have a choice after Sweeney Todd (aka my husband) gave him a haircut. The poor dog looked like he had been butchered. He had bald spots on his back, but overgrown hairs on his paws. He finally looks like himself again: an Ewok. 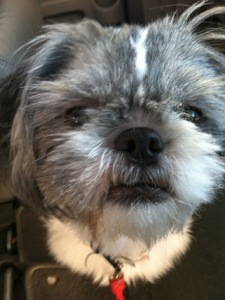 My kids love this dog. They don’t have to walk, feed or bathe him as much as I do. Nor do they have to vacuum daily or pull yarn out of its ass. (TMI?) Is my dog secretly enrolled in a knitting class? I don’t have yarn lying around the house. Is someone smuggling it in for him to eat? I have considered taking up the hobby of knitting. They say it is relaxing. Who is they? I have no idea. I do know Ryan Gosling knits. GQ told me so and everyone knows what’s in that magazine is gospel. Could Ryan be anymore perfect? Not only could I snuggle on his abs, but I can do it while wearing a lopsided hat that he made.