I had the pleasure of co-hosting a local radio show last week. In two days there was a comic legend, a hockey hero and a magician in studio. Andrew Basso is a modern day Houdini. His signature act involves being handcuffed and placed upside down in a locked box full of water. He has to use a bobby pin to remove the handcuffs and pick the locks. He does wear nose plugs. Even magicians hate getting water in their nose. At what age does one realize he would be good at escaping from a locked box full of water? Do you experiment with inflatable pools and work your way up? 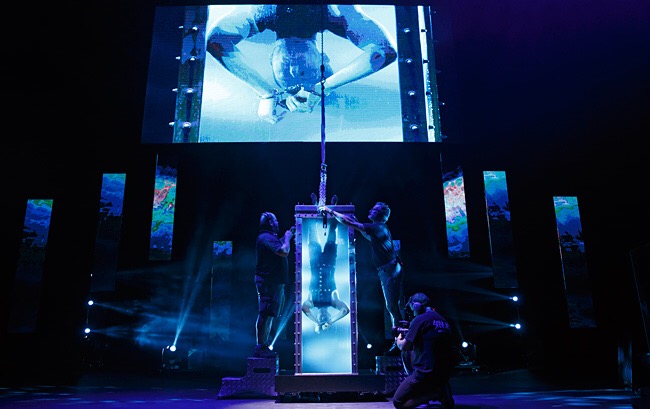 Basso speaks with a thick Italian accent which makes his act more alluring. It just wouldn’t be the same if he explained his dangerous feat with a southern twang. Basso is a handsome man with jet black hair. It is short in length, but long on top. The sides are shaved. He combs his hair straight back and uses an excessive amount of hair product to hold it in place. If I were to guess I would say he goes with L.A. Looks. If this gig doesn’t work out Basso can always join the Thompson Twins. In the meantime, he is part of a traveling show called “The Illusionists.” There are seven magicians with different specialties: “The Warrior,” “The Manipulator,” “The Trickster,” “The Inventor,” “The Anti-Conjurer,” “The Escapologist,” and “The Futurist.” That basically describes every ex-boyfriend I have ever had. The show looks entertaining. I can relate to these men. As the mother of three children I perform magic on a daily basis. Here are just a few of my tricks:

1.) I can get a raucous child to freeze by counting to three. I don’t usually get to three. Sometimes I only have to announce that I am going to count or ask a child if he/she wants me to count.

2.) I can sense when a child is going to be sick, wake from a sound sleep, run to the bathroom with one eye closed and catch puke in a bucket.

3.) I can cook dinner while simultaneously solving 2nd grade Common Core math problems and never take my hand off the spatula.

4.) I can give the illusion that I enjoy playing with Barbie Dolls at age 39.

5.) I can run on the treadmill while reading my daughter a book.

6.) I can enter and escape a sleeping child’s bedroom without making a sound.

7.) I can make a bag of candy disappear at night.

8.) I can use the bathroom while breaking up a fight in the other room.

9.) I can make socks vanish from the bedroom floor.

10.) I can make toilet paper reappear on the roll in the bathroom.

One Response to It’s Magic You Know