If I were single the money I spent on all of these Legos would have been used on a designer bag. Last night I would have put on an amazing outfit, grabbed the bag and gone out to a fantastic restaurant. Chicken nuggets would not have been on the menu. Instead, I spent an hour sorting Lego body parts. Heads, torsos, legs and hands each had its own pile. I felt like a detective on CSI only my crime scene included Batman, Flash and Darth Vader. As I worked my 5-year-old giggled with excitement. He was going to build “1,000” Lego guys. Well, by the time I was done he was bored and moved on to something else. By now, if I were single, I would be having drinks and laughing with friends. I spent another hour reading my daughter a dozen books with more pictures than words. If I were single I would have gone home to an empty apartment. I was wearing Yoga pants when I tucked my kids into bed. “I love you Mom,” echoed through my house. I wouldn’t change a thing. (Well, I wouldn’t mind that designer bag.) 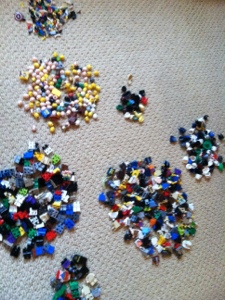