I have heard of parents taking extreme measures to potty train children. One family put a 3-month-old on the toilet and swore the child was learning. The baby would pee anywhere if he/she wasn’t wearing a diaper. The potty training story I read about today tops that. A mother in Utah decided to potty train her twins in a public restaurant. Initially, other patrons thought the kids were sitting on booster seats. Well, that is until the toddlers were stripped down to their bare bottoms. 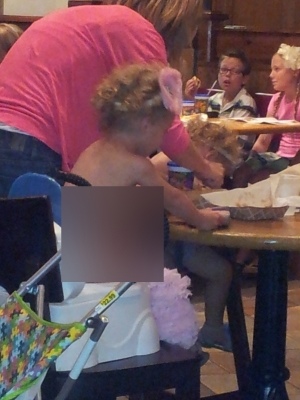 Any mother knows you are essentially on house arrest while potty training. You put your child on the toilet every hour or so. In the meantime you watch them like a hawk for a sign they have to go. My daughter would crouch on the ground like Yogi Berra. I would ask, “Do you need to poop on the potty?” She would lie to my face. “Nope,” she grunted as her face turned a bright shade of red. At this point you carry them to the bathroom faster than an Olympian on steroids.

You don’t go to the store or a restaurant until they’ve mastered the skill. I would have to imagine potty training your kids at a table inside a public restaurant violates some public health codes. It is also extremely gross. Did she think nobody would notice? Shit smells like shit no matter how old you are.