I decided to take the kids bowling today. My 3-year-old and 5-year-old were ecstatic. My son actually jumped up and down, “This is the best day ever!” Who knew floor wax and 1970’s decor could bring him so much joy? It was a monumental day for my daughter as well. This morning, I introduced her to the “spork.” It blew her f-ing mind, “Wait, it’s a spoon and a fork?” That’s right girlfriend, take some time to process that one. I forced my 13-year-old to tag along. He was not happy, but it won’t kill him to spend some quality time with his damn family.

The bowling alley in our town was closed for a tournament. So, we drove to another alley in a nearby village just 5 minutes away. It sounds very primitive, but it is technically a village. There is one stop light, one police officer and many of its residents only have one tooth. 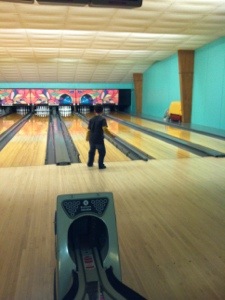 The clerk, a man in his late 60’s, was slamming a bottle of beer when we walked in. It was just after noon. I suppose you need alcohol to get through a day of handling used shoes. He was less than pleasant. He scolded the kids for wearing their “street shoes” near the lane. We wouldn’t want to ruin the vintage linoleum. The ball got stuck a handful of times in the gutter which pissed him off even more. The funny thing is he wore his street shoes on the lane to get it. I am sure the polyester wearing, mustache donning, bowling Gods would frown on that move big guy. Mr. Personality was rocking the white New Balance sneakers which made me think of this movie clip:

I laugh out loud every time I watch that scene from “Crazy, Stupid, Love.” Then, I whisper “I love you Ryan” to my TV. I’m kidding about the last part. (Sort of.)

I had the highest score. I credit years of watching professional bowling tournaments with my parents. They were on every weekend when I was growing up. I scored an 86. Pete Weber who?