Where the hell is Spider-Man when you need him? Not even an hour after posting about the movie filming in Rochester, NY I needed a superhero.

I was driving downtown when I pulled over to take a phone call. It’s illegal to talk without a hands free device.
I confess, I wasn’t always a law abiding citizen. I got into serious trouble when I was 19-years-old. My friends and I decided to alter our driver’s licenses in order to get into a local bar. At this joint, Bartenders served watered down cocktails. College guys with IQ’s lower than Ryan Locte crowded the bar. That was fun to us?

By the time we were done defacing our photo ID’s they looked like the artwork hanging in my son’s kindergarten classroom. I decided it wasn’t worth the risk of having my license confiscated. So, we aborted the plan and watched a movie.

A week later I made an illegal u-turn in front of a police officer. In my town that could land you on the cover of the local newspaper. I handed the officer my license completely forgetting the birthdate was off by five years. With enough Wet n’ Wild lip gloss and Baby Soft perfume I could pull off 24. On that night, with my hair in a scrunchie, I could not. “Do you realize what you have done,” he questioned sternly. “You committed a felony young lady by altering your license.” I tried to explain that I never actually used it, but he wasn’t budging. As he stood at my window writing a ticket I recognized his type. He was probably a hall monitor in high school who, with a neon orange Miss America sash draped over his chest, wanted power over the more popular kids. Unfortunately, he weighed 80 pounds soaking wet and played Magic the Gathering. So, he got zero respect. Now, he has a real badge and is getting revenge. Luckily, the judge handling my case gave me a break. The charge was downgraded to a traffic violation, but it was enough to scare the shit out of me. I don’t know how Lindsay Lohan does it.

Abiding by the law is what got me in trouble yesterday. I sat in my car on the phone for about 30 minutes. Unfortunately, I left the lights on the entire time. The battery was dead and I was 40 minutes away from home. No worries, I worked in this city for over decade in the TV news business at both the CBS and NBC affiliates. Surely, one of my former co-workers could help. It was early in the morning. In my experience, at this hour, crews are just hanging around the station. I called the local CBS station and a photographer agreed to give my swagger wagon a jump. However, while en route, management called him back. “Sorry, he can’t help you we have to shoot an interview.” Really? I called the NBC affiliate that I dedicated ten years of my life to. Many of these people were like family to me. My car was broken down around the corner from the station. How could they say no? After ten minutes I got another text message. “Sorry, we have to shoot an interview.” I asked a few people on the street for help, but was told “I don’t have time.” At this point I was on the verge of tears. If my car was on fire or there was a dead body in the backseat every station in town would be on the scene. I was about to call a tow truck when a producer from the NBC station called back. She and a female photographer convinced management to let her help me. It took all of two minutes to get my van running again. It turns out I didn’t need a web slinging man in spandex. My hero was a good friend with a big heart. Thanks Gretchen! (P.S. I am getting roadside assistance!) 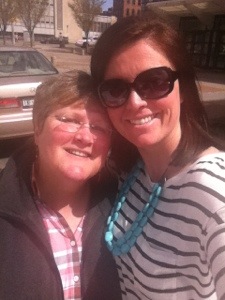