My heart skipped a beat. Could it be? Ryan Gosling favorited one of my tweets? What did I write on Twitter that inspired him? Was it my tweet about a spork? Did he enjoy a tweet about my bickering children? 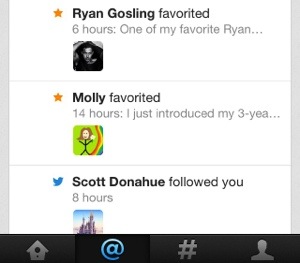 Snap out of it woman! Ryan Gosling doesn’t want to hear about potty training or your c-section scar. It wasn’t the real Ryan Gosling. It was the Ryan Gosling Fan Club. (The official club, not one of those poser clubs) I may be a lonely housewife pining for a celebrity who doesn’t know I exist, but I am not pathetic. I am not going to join a fan club at 37-years-old. I have only joined one fan club in my entire life and I got screwed. (Get your mind out of the gutter!) More than 20 years later, I am still waiting for my membership packet to the New Kids on the Block Fan Club. What’s up with that Joey Joe? I recently found a box in my parent’s attic that contained my NKOTB collection. It included a lunchbox, watch, t-shirt and doll. I gave the doll to my daughter. Princess Barbie wasted no time moving in on that hot piece of meat.

No, I don’t own a Ryan Gosling doll, too. They don’t make them.