Things that make you go hmmmmmm

I actually received an email questioning, “Why haven’t you written anything in the past few days?” I love my fan.

I could barely get out of bed, let alone type. I exercise on a daily basis, but my muscles are spent. Raking a million leaves will do that to you. Well, it will do that to you at my age.We got a little behind schedule with our Fall cleanup. Minutes after my husband started clearing the yard today the belt busted on the lawn mower. He insisted he could fix it. This is coming from the same man who “fixed” the oven door with scotch tape. He grabbed his tools. I grabbed a rake. Why can’t men just admit they can’t do something? I can’t pole vault. I can’t carve a bear out of wood with a chain saw. So, I won’t.

I was sweating profusely and cursing under my breath for about an hour until he finally admitted defeat and helped. I miss the (alleged) crackhead that used to rake our leaves. My husband paid this guy $40 to rake our entire yard. He looked like Sebastian Bach, but rolled up to our house on a ten speed. Forty bucks was a steal. There are a lot of trees out there. He could make more working in a sweatshop sewing articles of clothing for the Kardashians. I must give him props. This fella was a hard worker. The problem was he liked to rake topless. He would tear off his shirt and hang it on his belt loop. It was November in upstate New York. His long curly locks were usually tied back in a low ponytail. His nipples were as hard as his beer belly. Oh, what the neighbors must have thought.

Anyway, I do have a few things to share with y’all. File these under the “what the hell were they thinking?”

My daughter opened a Halloween bag this morning with an unusual treat. Yes, this morning. You have to pick your battles.

I would love to know the thought process behind this grab bag. Should we give pre-schoolers lollipops? No. Hershey Bars? Too messy. Skittles? Nah, too colorful. Let’s throw in a piece of candy flavored with alcohol.

….and here is another

I scratch my head every time I drive by this road. The ‘road naming guy’ couldn’t come up with something else? Perhaps, he was drunk. I think his buddy suggested the name, they giggled and gave each other a high five. I would get a P.O. box if my house was on this street. 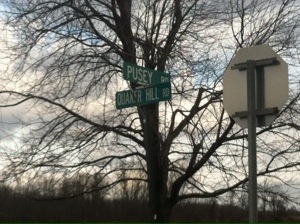