I sat outside a coffee shop this morning for 30 minutes waiting for a friend. It was just what the doctor ordered. The sun was shining and birds chirping. The coffee shop is nestled in a small plaza behind an ornate iron gate. There is a long brick walkway leading to the entrance with trees scattered throughout. I cannot remember the last time I enjoyed a quiet moment alone. It was heaven until…. two crackheads appeared. The woman was wearing cut off jean shorts and a paper thin white tank top. The man looked like he hadn’t bathed in months. I don’t know the extent of their conversation, but she was cursing him out. I don’t think it was for using the last of the toothpaste. Together they walked to an ashtray outside a restaurant and lifted the lid. He held up a cigarette butt and looked to her for approval. If she nodded he carefully placed it in a plastic baggie. I am pretty sure that is close to rock bottom. They just haven’t realized it. 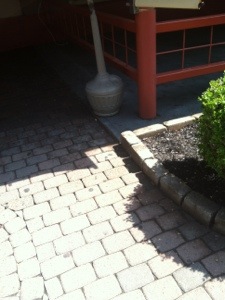 I closed my eyes for a brief moment as a gentle breeze caressed my hair. I was back in my happy place until.. a pungent odor smacked me in the face. Apparently I chose to sit near a toxic waste dumping site. One by one workers from nearby restaurants came outside to dump filthy water into a sewer grate. 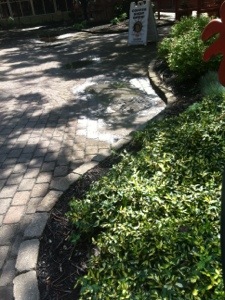 Still, I was alone and nothing was going to make me leave. Well, that was until….a homeless man plopped down on another bench directly next to me. He reeked of alcohol and urine. If that wasn’t bad enough he let out the loudest, most vulgar fart I have ever heard. The noise was similar to an app on my son’s IPod. My children think passing gas is hysterical. This sound did not emerge from an electronic device.

I had to admit defeat and walk away. I will take my screaming children over this chaos any day of the week.