I spent 20 minutes this afternoon in the bathroom of a Mexican restaurant. To quote the great “Shaggy” (a.k.a. Mr. Boombastic) and every person ever arrested for a committing a crime, “It wasn’t me.” My daughter had to use the loo. She also needed to sing every song she ever learned inside that bathroom. The more I encouraged her to speed it up and do the deed, the longer it took. Obviously, I cannot leave a 4- year-old in a public restroom alone. (Thanks a lot creepy guys at restaurants.) However, I have been instructed not to look at her. So, while she sang about being a little popcorn, I faced the opposite direction and surfed the web. This story is a hot topic in our local news:

(Click for link to article. Then, come back here.)

The teacher is accused of using vulgar language in her classroom. A student snapped this picture last year. (Note to student, you may want to consider a career that doesn’t require a timely response. It took 365 days for the photograph to come out? Did Paul Revere deliver it to the media?) 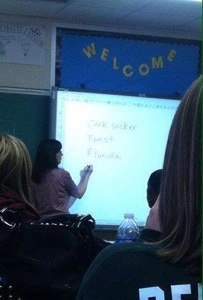 Is it inappropriate to write the word “cocksucker” on the board? (I would have went with ass or bitch) Sure, but does she deserve to lose her job? I don’t think so. It has been said that she used this language to relate to her high school students. She should have chosen another way to reach her students. However, face it, your teenagers aren’t as innocent as you think. Now, I am not a teacher nor could I ever be. I don’t have the patience. I need a Xanax after helping my own kid with math homework. The teacher resigned soon after the school launched an investigation. I would love for the parents who got their panties in a bunch to check their child’s IPod. I’m guessing Lil’ Wayne says a lot more than cocksucker. He isn’t talking about eating actual lollipops. How about we fire teachers who just suck?

(By the way, my apologies to the person waiting to use the restroom. I think we can both agree it was a great rendition of Twinkle, Twinkle, Little Star.)