Note to self: avoid wearing Khakis the next time you shop at Home Depot. Apparently, it’s like wearing a dirty concert t-shirt and gigantic ear plugs while shopping at Barneys New York. It was either my attire or this particular Home Depot is sick and tired of suburban Moms stealing bug spray and granules.

Here is how this adventure started: I was outside picking weeds, lifted a large rock and discovered an ant colony. It was actually an ant country. There were thousands of those little suckers. I dug further down with a shovel sending ants falling into the small pit. Look, if they stayed outside and minded their business I wouldn’t have a problem. Unfortunately, ants want to come inside and hang. I had no choice but to declare war after I saw a few in my entryway. There is only room for one queen on this property. So, you are going down bitch.

I put the minivan in high gear and raced to the hardware store. I grabbed what I needed and checked out, avoiding any temptation along the way. Who needs an oven door that actually closes anyway?

As I approached the exit I felt someone staring at me. “Um, excuse me,” she said briskly walking behind me. “Do you have a receipt.” I was carrying a 12 pound bag in one hand, liquid ant shield in another, a purse and plastic bag on my arm. “Yes, it’s in here,” I said motioning to the shopping bag. “Well, I need to see it,” she demanded waving her finger in a circular motion. She was wearing jean capris pants and was covered in tattoos that could have been drawn by my 3-year-old. Meanwhile, two other people, who may have just been released from a state penitentiary, walked out before me without being interrogated. “Okay,” I giggled, but was seething inside. Doesn’t she realize my garden is being overrun by ants who may be escaping as we speak? If I were to break the law I would steal something more valuable than bug killer. A friend dared me to steal lip gloss when I was in middle school. I still hide under the table when a police car drives by. You won’t take me alive coppers!

I want to meet the person who managed to sneak a 12 pound bag of granules out of the store undetected? Then, I want to shake his/her hand because that takes skill. 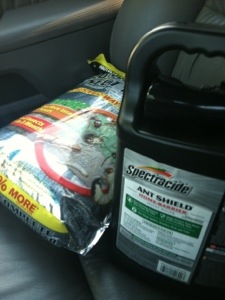 I showed the store clerk my receipt that included two bags of candy of which I am currently devouring. Okay, so I got a little distracted on the way to the cash register. “Thanks,” she said still eyeballing me. “You should have your receipt handy next time.” “Well, my hands are kind of full,” I replied in a sing- songy voice. “This just isn’t usually a door people leave out of.” I came in this door. My car is parked a few feet away. The signs above the door read Enter and Exit. If it said One Way I would have walked 2 miles to the other door. “I am parked right outside of this door,” I said, with less giggle and more attitude. I couldn’t let her have the last word. I have this battle every day with my 13-year-old. I will win this time damn it. “Okay, well have your receipt ready next time.” she said. “I will tape it to my forehead,” I said jokingly, but not really joking. “Okay. Have a good night,” she said. “Oh, you too!” and I power walked out of there before she could say anything else. If I don’t hear her last word it means I had the last word. If my hands were free I would have waved….a finger.