My 2-year-old daughter wants to go live with Suzie. She hasn’t called to reserve a UHaul yet. This was a rash decision, made out of anger. After a long day, which included a fun birthday party at the zoo, she was extremely tired. In situations like this I would normally say “screw bath time,” but, at one point tonight, she was in close proximity to Rhino shit. So, I peeled off her clothing and plopped her in the bathtub. She was kicking and screaming, “I don’t like you anymore. I’m going to live with Suzie.” It would be an impossible move since Suzie doesn’t exist.

Suzie came into our lives several months ago. My mother was playing with my daughter’s dollhouse and named the little blonde haired girl Suzie. Well, my mom wasn’t playing alone. That would be awkward. The only name my daughter came up with was “Plick,a,Plick,a,Plee.” Suzie it was. 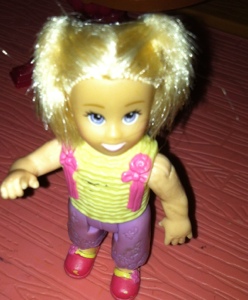 My daughter always plays the role of Suzie. To be frank, Suzie is a little bitch. She refused to share and was mean to the other dolls. She really had it out for Barbie. Can you blame her there though? Who doesn’t hate a woman with a tiny waist and perfect breasts?

Before long, Suzie morphed into a real (pretend) person. She spent the night and on several occasions. I even had to set a place at the dinner table for Suzie. She never liked anything I served. Yesterday, my daughter told me Suzie had to go to the doctor because she swallowed a bee and a spider. Perhaps, she swallowed the spider to catch the fly? I informed my daughter that she cannot live with Suzie because I would miss her. I am also guessing Suzie’s imaginary parents are crack heads who live in filth. Just a hunch. She replied, “Well, then I will live with Grandma.” I am in trouble.