I did something this weekend I rarely do. I watched a movie that was not rated “G.” There wasn’t an animated princess, minion, fish, etc. I saw the movie “Her” at night in an actual theater. I didn’t even smuggle popcorn or candy inside, opting instead to waste my son’s college fund at the concession stand. When the popcorn was gone I suggested my husband refill the container so we could bring some home to the kids. “What the hell is wrong with you?” he asked. We laughed. Then, I picked a few kernels out of my dentures and hiked up my nude knee high pantyhose.

I will be honest, when the previews first came out, I thought, “You have got to be  kidding me.” A guy falls in love with Siri? What are these film companies thinking? Next thing you know they will have a guy from a Jennifer Lopez video play a superhero.

So, what made me want to see it? I can tell you it wasn’t Joaquin Phoenix’s mustache. There is something wrong with a man under 40 who grows a mustache. I fully expect that guy to drive a van with blacked out windows and end up on 60 minutes.

I was intrigued after reading all the positive reviews. It is a beautifully written script. Well, minus Joaquin’s awkward phone sex scene with his phone. File that under Things I don’t want to ever watch again in a room full of strangers. The costumes were also a bit odd. Apparently, in the future men wear pants that rest on their sternum. It must take 10 minutes to close this zipper. 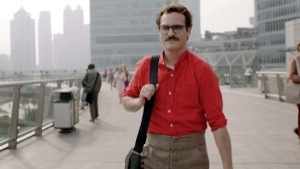 I would recommend seeing “Her.” I would also recommend refilling your popcorn bucket. That s**t is expensive. You might as well get your money’s worth.