I recently read an article about Ty Beanie Babies being worth far less than experts predicted. Do you remember how people flocked to stores to buy the latest release? True collectors protected their Beanie Babies in curio cabinets. Amateurs cut off the tag.

Fast forward a decade later and you have a worthless box of teddy bears. Fools. (Evil cackle) I had a better plan to get rich. I collected New Kids on the Block Memorabilia. Who the hell could have predicted that comeback? There was no way of knowing women, on the verge of “the change,” would buy albums and concert tickets in 2013.
So, according to the Ebay Gods, my vintage lunchbox is not even worth 20 bucks.

A few months ago I decided to clean out my collection. It has been stored in my Mom’s attic for well over a decade. I donated a t-shirt to Goodwill. So, if you see someone walking around town sporting a Hangin’ Tough t-shirt, you’re welcome. I gave my 3-year-old daughter the Joey Joe doll. That slut Barbie has already gotten her claws into him. I think she just wants his gold ring. I washed the beach towel and placed it in our linen closest. A few days ago, I decided it was time to put NKOTB to work. So, after a fun filled afternoon on the Slip n’ Slide (not to be confused with the Slip and Slide) I wrapped my 6-year-old in that invaluable towel. My son asked, “Who are those guys?” I told him, “New Kids on the Block.” He gave a blank stare. “They were a popular boy band when I was younger,” I explained. 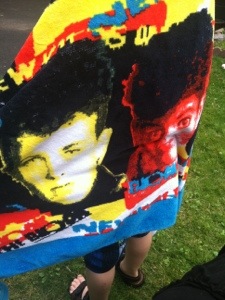 My son was not impressed. He kept the towel on long enough for me to snap this photo before demanding a new one. I will never understand kids these days. Who wouldn’t want Jordan’s face on a beach towel? He has the right stuff. (Thank you, I will be here all night. Tip your waitresses.)